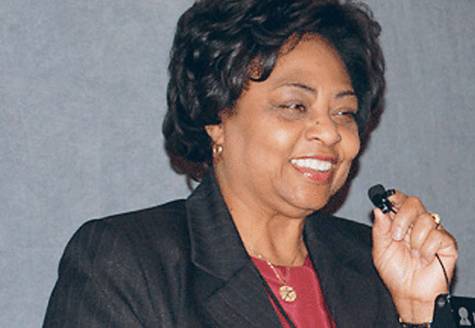 If you’ve been watching any of the major news stations this past week then you’ve heard about the debacle with Shirley Sherrod, former Georgia Director of Rural Development for the USDA. The gist of the story is that she was fired after making a speech that was edited into a few seemingly inflammable statements and posted on youtube by an “anti-obama administration” pseudo-journalist. The real debacle was the fact that Fox News, NAACP and others (not including CNN) took the youtube video as a credible source and publicly lodged claims of reverse racism on Shirley’s part and called for her resignation. Next thing you know someone in the administration called Shirley and forced her to resign from her position. Once the full tape of Shirley’s speech surfaced it turned out that her comments were taken completely out of context, which prompted a slew of public apologies as well as an offer for her to return to work with the USDA in a different capacity.

What’s interesting about this incident is that it completely overshadowed the President signing the historic Wall Street reform bill. Which begs the question, was this all a right wing stunt to steer the media away from covering the signing of the Wall Street reform bill? Or, less dramatically, was this just a colossal goof on the part of everyone who is responsible for keeping the “24 hour news cycle” going?

Tell us Vyne Readers, what do you think? Right wing conspiracy or colossal media goof?

As of today, the calamity that is the BP oil spill is still yet to be contained. Is it us or is this just down right ridiculous? Between the engineers and the scientists that work for BP, are you telling us that no one….absolutely no one…can figure out how to stop this madness from continuing to pollute our precious bodies of water? It is absolutely unfathomable that this company was allowed to drill without demonstrating that they had a solid, executable contingency plan in place. And not for nothing, but we’ve about had enough of the political pundits trying to blame our fearless President Obama for this oil spill. That is about as ludicrous as blaming him for the exorbitant amount of debt our country is in. Did you get a chance to see James Carville in a completely certifiable rant and rave about how he felt President Obama didn’t move fast enough, when in fact President Obama has made three trips to the gulf since the spill began on April 20, 2010.

Apparently, BP has opened up a suggestion line for people with valid ideas to submit them for consideration. At this point, we should try and consider every viable option. I’ve heard everything from attaching a butterfly valve on the pipe to soaking up the oil with a huge sham-wow. Here’s hoping the latest pipe cutting procedure works but experts say it’s too soon to tell.

So Vyne readers, given the implications of this disaster, have any of you begun to think about how to curb your dependence on oil? At the very least, when it’s time to fill up your tank again, and you see BP…think By Pass!

Haiti: In Our Prayers

Our prayers and thoughts go out to everyone in Haiti who is courageously fighting to stay alive in the aftermath of the devastating earthquake. We have dear friends whose families have been impacted by this tragic event and we’re sure you do too. If you haven’t already, please consider giving to the below legitamate organizations to help our Haitian brothers and sisters weather this storm. Kudos to our President, Barack Obama, for getting all hands on deck to support the releif effort and kudos in advance to each of you for stepping up to support.

Red Cross, text “HAITI” to “90999” and a donation of $10 will be given automatically to the Red Cross to help with relief efforts, charged to your cell phone bill.

Americans looking for info on family/friends in Haiti: The U.S. State Department Operations Center said Americans seeking information about family members in Haiti should call 1-888-407-4747. Due to heavy volume, some callers may receive a recording.

We’ve seen her next to and behind the president and know her as a powerful adviser. But who is Valerie Jarrett? Though quite elusive, she is an interesting woman with a fascinating story. Given her international exposure and strong pedigree, it’s not surprising that she is Barack and Michelle Obama’s “BFF.”
An only child, Valerie was born in Shiraz, Iran in 1956. No, her ethnicity is not Iranian and her parents were not in the military. Her father, James Bowman, rather was a geneticist and pathologist working for a program that brought American doctors to developing countries. They lived in Iran until Valerie was five at which time they moved to England for one year before moving back to the Hyde Park neighborhood in Chicago, where her parents had strong ties. During her childhood, she traveled around the world with her family. During the summers her father would often do research around the world. In an October 2008 issue of Vogue, she described how one summer they “went from Ghana to Nigeria to Ethiopia to Uganda to Egypt and then back to Iran.” This experience she says, “required me to be able to straddle a bunch of different cultures and worlds. It made me comfortable talking to anybody at a very young age.” These skills would certainly serve her well later in life.

Valerie’s childhood was very different from many African Americans growing up in the 1960s. Considering her parent’s emphasis on education, it’s not surprising that she attended the both the University of Chicago Laboratory School and Northfield Mount Hermon boarding school in Massachusetts before heading to Stanford for undergrad. After graduating with a BA from Stanford, Valerie headed back to the Midwest where she attended law school at the University of Michigan where she received her JD in 1981. In 1983 she married William Robert Jarrett, childhood friend and son of a Chicago Sun-Times columnist Vernon Jarrett. Though they were only married for a few years, they had a daughter, Laura. It was, in fact, the birth of her daughter that caused Valerie to make a career switch from the private sector as law firm attorney to the public sector. She told the Chicago Tribune, “I wanted to do something she’d be really proud of me for.” Her daughter now is studying at Harvard Law School.

After her transition to the public sector, Valerie held several positions under mayors Harold Washington and Richard M. Daley. It was during her tenure in Richard Daley’s office where she met a 27 year old Michelle Robinson (soon to be Obama). During that interview process she met the then fiancé of Michelle who not only grilled his future wife’s future boss but also established the foundation for a long friendship. Neither could have predicted that over 15 years later that same man would ask her to serve as Senior Adviser of his presidential campaign and Co-Chair of his Presidential Transition Team.

Saying that she keeps her plate full would be an understatement. She held the position of CEO at The Habitat Company, a real estate development and management company, where she joined in 1995 and worked for over 10 years prior to joining Mr. Obama. She has also held numerous board positions including the University of Chicago Medical Center, USG Corporation, and the Chicago Stock Exchange, where she also held the Chair seat from 2004-2007. If that wasn’t enough, she also served as the vice chair of the Chicago 2016 Olympic Committee.
On November 15, 2008, she Valerie was appointed to be the Assistant to the President for Intergovernmental Affairs and Public Engagement. In this role Valerie manages a large portfolio of offices: the Office of Intergovernmental Affairs, White House Office of Public Engagement, Office of Urban Affairs. In addition, she chairs the White House Commission on Women and Girls and White House Office of Olympic, Paralympic, and Youth Sport.
Though we may see her more than we hear her, we should not underestimate Valerie Jarrett. As one of the most trusted confidants of the president of the United States, she just may be one of the most influential women in the world.

The Obama Victory: One Year Later 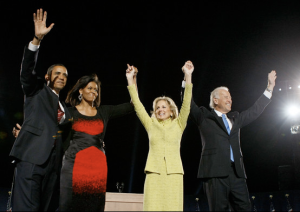 November 4, 2008: the night that most of us will never forget. I bet we all can remember where we were when the votes came in and Barack Obama became the first Black president of the United States.
For me, I had just awoken shortly after touchdown in Dallas. “We did it! Your vote counted, girl!” was the first voicemail I received (from my mom) after I landed. I was still registered to vote in Illinois and since my absentee ballot I requested never arrived, I decided 48 hours before the election that I had to fly to Illinois to vote. There was absolutely no way I wasn’t going to be able to tell my children that I voted in the 2008 election. And even though I had a pretty good idea the democrats would take Illinois, I still wanted to make sure my vote was counted. And the joy that came over me when I selected “Obama/Biden” for my presidential vote made the price of the ticket well worth it.
I remember watching the votes coming in on CNN while I was on my layover in Atlanta that evening. I was on the edge of my seat, hanging on to every states’ results as they came in. But it wasn’t until I landed in Dallas that I found out the results. The poke on my arm from the person sitting next to me woke me up from my slumber. As I opened my eyes I was greeted by a CNN browser on a BlackBerry as the stranger in the seat next to me said, “He won!” And though I heard the words he said, I knew that from one brown person to another, he was really saying, “we won.”
As I walked into the DFW international airport, there was a group hovered around the hanging television at our arrival gate. Obama was giving his speech in Grant Park. As I watched him speak, it hit me. It consumed me. It overwhelmed me. As I thought about the meaning of this monumental election, I realized that I was a part of history. Arguably, no longer could race be a hindrance or a crutch. No longer could I, or my people, feel like there was anything we couldn’t do. The highest post in the land was now honorably occupied by someone who looked like me for the first time ever. And there I was, in the middle of gate 31C in the DFW airport, uncontrollably bawling my eyes out.
And here we are one year later.  Has the triumph we felt that night continued? Do we still feel invincible? Has Obama’s victory changed the racial temperature for the better as many thought?  Share your story and tell us how you feel.